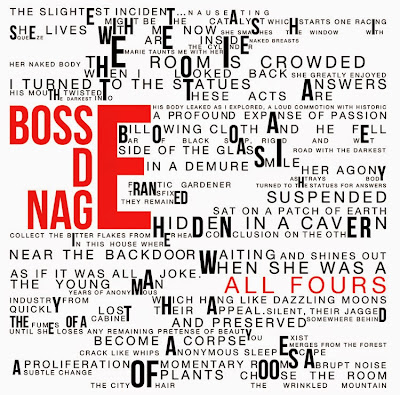 Bay Area band BOSSE-DE-NAGE have always been one of the most intriguing bands, extreme metal related, out of the area and its scene even though the band, as prolific as they have been since their first demo “Demo 1” in 2006 demo was released, have kept a pretty low profile (i.e. no promo photos, interviews, and live performances were quite rare and few). But it has been through their intriguing mix of black metal and classic early ‘90s indie-rock/screamo/punk along with their thought-provoking lyrics that has defined their visceral sound.

Following their two demos, their three previous full-length albums (released from 2010 – 2012), and their last release which was a split with their friends in Deafheaven, BOSSE-DE-NAGE are preparing to unleash their deadliest, most provoking and vicious work to date. Three years following their last full-length “iii”, “All Fours” sees the band create their most epic album to date, musically, lyrically, and on a production level likewise (the album was produced and recorded by Jack Shirley, known to be responsible with capturing bands such as the aforementioned Deafheaven). Like a soundtrack to someone having the ultimate mental breakdown, “All Fours” harbors the familiar traits within BOSSE-DE-NAGE’s sound while expanding even further into more experimental and noise territory likewise.