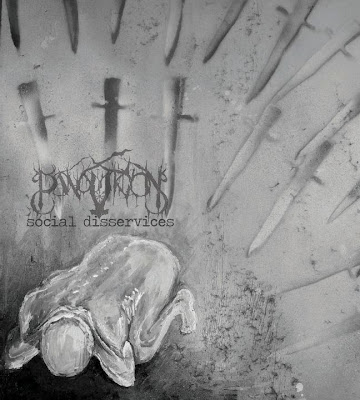 RABM in the vein!!!
review by cvlt nation:

"Panopticon’s A.Lundr (Austin Lunn – also of doom merchants Seidr) is a man with much to say. Each release from this band has a message and each has it’s own individual tone and feel whilst being unmistakably, a Panopticon record. In the past the band has commented on the struggles on dealing with one’s own mortality, with the collapse of government and on Social Disservices the subject matter is as relevant and hard hitting as ever.


Social Disservices is a raw record. Vocals are harsh and the production is just the right side of coarse, adding to the images conjured by this story. You can hear the sense of struggle, of not having your voice heard in the environments suggested. You can hear the dedication A.Lundr has for this cause and the people affected. This is a man who cares, a man with a background in activism, in social anarchy and from whom a lot can be learnt. I stumbled across Panopticon via a friend suggesting I give the band a listen and I picked up Collapse and the self titled record. I love music and I love music with a message and this gave the best of both worlds. Mixing an abundance of styles – bluegrass, crust punk, post-rock and the ever present black metal tone – with the RABM (Red & Anarchist Black Metal) ideology was a whole new world to me. Not least the RABM movement about which I knew nothing (check out that link above for a better overview of what it is about).

Beginning with “Resident,” the album immediately sets out it’s course. The track starts off with a sample of children laughing, giggling and sounding quite happy. Then, with what wounds like a click of the fingers, we descend into a world of terror. This is heavy. This is anger. This is Panopticon. The sound on this album is incredible (mastered by Colin Marston of Krallice), giving each element room to breathe. The pounding drums, the gorgoeous flashes of post-rock guitar. The vocals are kept low – as usual with this one-man band – yet this only adds to the absolute alarm felt. You’re never quite sure about what’s going on, and it all comes back to the ideas behind the record.

Social Disservices is the first of two records to be released in quick succession on one of the most exciting labels out there at the moment, Flenser Records. Dealing with the Social Services system and ultimately, it’s failings, this album is one with a strong concept and one that shouldn’t be ignored or swept under the carpet- much like the subject matter. Artists such as A.Lundr have a voice that needs heeding, it’s from people at the ground level that change can be affected. Look at the “Occupy Wall Street” movement, a collective with a passion for what they believe in and a passion that’s spreading to other major cities and to other countries. It’s incredible to see history being made. And whilst this album isn’t a diatribe on the economy, it is an album concerned with the effects of a corruption riddled system on today’s youth. A.Lundr is well placed to speak of these effects having worked within the system himself. The physical release features a lot of information regarding his experiences and the reasons behind making this particular piece. You’d be doing yourself a disservice by not seeking it out.

“Client” begins in the complete opposite manner to the previous track. This time utilising a sample of crying children, plainly scared and terrified. It’s genuinely unsettling and I can’t even imagine where this sound has come from. This shocking introduction is countered by beautiful guitar work in the initial stages of the song, and it’s this uneasy harmony that really sets the album apart from other Panopticon works. Whereas other records might have focused on one element of the Panopticon sound, Social Disservices is really an all encompassing album. Bringing together the styles heard on recent output On The Subject Of Mortality (released as two halves across two splits) and also this years split with Seidr band colleague Crow’s Wheels Within Wheels act, it’s an album of huge scope.

The opening minutes of “Subject” are almost industrial in nature, a driving beat underpinning the screams of A.Lundr quite majestically. The heavy as heavy can be bass ripples through until around four minutes when the style changes altogether. It’s jarring and the post-rock beauty shines through. It’s a heartbreaking spin on the songs axis, and full of pure emotion. A few minutes later, the vocal really comes to the fore. It’s so stark compared to other moments in the song and on the record, so full of truth that you cannot help but to fully immerse yourself in this world. You listen, and you listen hard. When the closing refrains feature footsteps down a corridor and jangling of keys to unlock a door fade, you may find deep and palpable pain in your heart.

Continuing this assault on the senses, “Patient” closes the album. A twenty minute grief-strewn, violin laden piece, it takes you to a place of pain and distrust. This track pulls in all directions – super harsh vocals, exceptional blasting drumwork, sublime bass driven moments – it’s certainly a stand-out track on an astounding piece of work. The final moments are full of divine bass lines and overwhelmingly ethereal lead guitar work. Shimmering and delicate, leading into the sounds of what appears to be nighttime and ultimately loneliness."