The Makai - Embracing The Shroud Of A Blackened Sky 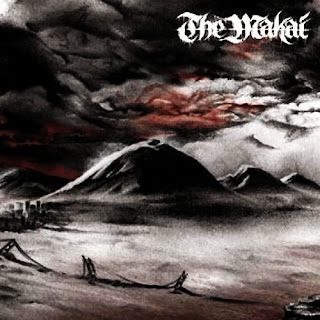 "I’ll get right to it, after one full-length (2007′s The End of All You Know) and a couple of splits, California’s The Makai have somehow rendered one of the most brilliant pieces of music I’ve heard with Embracing the Shroud of a Blackened Sky. Now I know most regular readers of this site know that I tend to get a little overexcited about releases, often gushing over them initially and then returning to a more sane state once the dust has settled. Kinda like when you are actually getting a blowjob… it’s always the best one ever! Right?!
However, it’s with some degree of conviction that I state that the one, 27-minute song contained on this vinyl only release―though rumors of a future CD-release linger in the air―is some of the most breathtaking music I’ve ever heard. At least within the realms of the genre ― that genre being a sort of blackened thrash/crust/screamo/metalcore hybrid, and even post-rock that could be lumped, under a vast umbrella that covers acts Withered, Uphill Battle and even Elder, Hiretsukan and Shai Hulud.
The strength of this song is its busy and epic, melodic tremolo picked riffage that’s more black metal than anything. There’s some truly searing but still harmonic blasts on this number that are simply mind-blowing. For instance at 1:35, 7:16, 9:54 and especially the awesome, climactic moment at 20:00: The rumbling/rolling percussion backs some searing, draining blasting that had my knees wilting. Throw in some more urgent but jangly melodies and some tense and somber moments, seething screams/roars and some atmospheric/ ambient/post-rock, bridges that signal the vinyl flipping and LP ending moments. And with the band being tighter and better produced (though still very brittle and organic) than on the debut CD, the whole thing comes together with stunning results. For you collectors out there, this LP-version comes with a giant poster of the cover art, as well as a gorgeous little lyric pamphlet.
It’s a pity this brilliant piece of music is only available to those with a record player ― even if all real metalheads have one, right? None the less, I hope the CD rumors come to fruition, so more folks can hear this shining gem! Perhaps they’ll include a 15-minute track called “Koschei” as well as the tracks from the band’s two split-releases. If and when that happens, it means I get to listen to “Embracing the Shroud of a Blackened Sky” another 274 times!"
review by teeth of divine