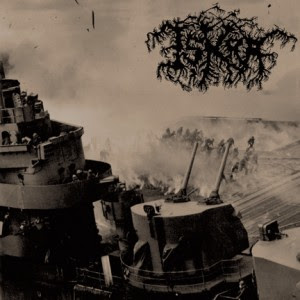 Siento tanto placer escuchando ese disco que no hay como escribir una buena reseña hoy, por eso dejo abajo unas pocas palabras de threat to existence records:
"T.T.E. is very excited to finally release this brutal slab of wax that has been in the works for quite a few months now. For those of you who have not had the privilage of seeing or hearing about both these awsome bands, here is a little info.

From Austin Texas, we have DOOM SIREN who storm into 4 brutal new trax of heavy & savage metallic crust.Reminds me a lot of BOLT THROWER Gutteral vocals vomiting hatred for capitalism and war. This being there third and best release yet, these guys are definatly one of my favorite active bands going right now in the states.


On the Flip side of the record hailing from Victoria BC, ISKRA never fail to impress yet again tearing through 4 new tracks of their trademark blackened crust, Including a cover of Marduk's "Levelling Dust".After releasing 2 full length LP's, a split LP with AGAINST EMPIRE, split 7" with SELF RULE, there own 7" and various comps and demo cassettes, they are still in full effect and hiting harder then ever, Fuck they are truely one of the most unique and greatest band of our time. Absolutely essential for anybody even remotely interested in crust or black metal!"
iskra website // doom siren website
DL!!!
Publicado por cm@punx en 15:39