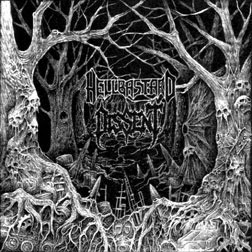 Dissent is a band from Texas, if not the band from Texas, that deserves more attention. Maybe now, after outdoing their idols, they will get it! This is definitely the side of this record getting all the spins from me, I must be honest about that. Since Dissent is so underrepresented outside of our lone-star state, I will first tell a little tale.
Dissent has been flirting with Crust and Metal since 2005. They started off playing anarcho-punk in the vein of Conflict and Aus-rotten. This was never released, and you will probably never hear it. They quickly grabbed a new guitarist as the guitarist/vocalist decided to focus on vocals. They started ripping out a unique brand of fast anarcho-punk with some thrash metal riffs in between and shreddy solos. This is what you hear on their first release, By Any Means Necessary. (Their most unique release, as the band has had its own sound from the beginning, but they get better from there.) Unfortunately, this album was subject to poor distribution and a small pressing which disappeared quickly, but it can still be found on some blogs.
When the band matured and added a second guitar shred machine, the band got heavier, and began their evolution from a metallic anarcho-punk band, to a death/crust band. I must say this was before the craze began, and before bands started throwing Entombed and Bolt Thrower riffs on top of some D-beat and becoming overnight DIY legends. Dissent was the first on that train, but unfortunately once again were not as well esteemed for it. This is a tragedy, as the bands second CD (which they’re calling an EP nowadays) was once again given a small pressing and disappeared before anyone like me could talk it up. I was listening though. The band did their second tour, and the second guitarist left the band.
Now is where we get to this release. This band has gotten heavier and faster altogether. Grind has been brought into the mix obviously, but the kind of grind is sort of crusty and is now what represents the punk sound. Napalm Death, Terrorizer, and Extreme Noise Terror are what I am hearing. The band has less apparent punk elements, but of the grind bands they seem to sound like, well they are all the really punk ones. The worship of Entombed, Bolt Thrower, Carnage and Carcass is all still there. The band is just generally faster then all their death/crust contemporaries. This sounds like a death/grind record from before 1990, when a whole bunch of those bands were still really crusty.
Every riff pummels and charges. Song structure is more solid and generally faster then previous works. While all the 2 guitar parts are gone (they will be missed), the songwriting has not stopped its progression. The individual riffs do not linger for too long. In fact, I haven’t had enough of it by the time its done. Thats a sign of a good release, when the listener hears parts and entire songs, and feels the riffs were memorable enough AND tolerable enough to want hear them immediately again! I swear, since I have gotten this, I haven’t listened to it a single time without immediately listening to it again. True story.
The production is audible and produced well! I actually have a bit to say about it. It sounds like the overall mix is conservative and much more well done then their previous releases, getting past their previous slightly overpolished sound. There’s even something great to say about the mastering. I hate the sound of compression done post-2000. Its because of CD’s and because of the loudness war, that major labels (as well as underground artists) are compressing tracks to make them louder and thus more full. Well I have a volume knob of my very own, and I am learning as an Audio Engineer that this is actually the stupidest thing you can do, and often done post-mix or even automatically by some software. Take the thin layer air out of the song, and you also lose certain frequencies, and sounds. The song (which you can look at as a long sound wave) needs that “air” to “wiggle”. The engineer obviously knows about this. The release is done with an overall master that doesn’t suck and is not overly compressed so it sounds loud which means well done to some idiots. It sounds like it was made at Morrisound or Sunlight studios in 1988 or something, with equipment all from today.
I encourage you to read the lyrics. They are delivered in a powerful manner when read along with the music. This is your choice as this is not Behind Enemy Lines, where the lyrics are audible. Half the time, I don’t read bands lyrics, because I don’t take the time. I take the time to read this bands lyrics, and they complement the music, like the music illustrates the lyrics. You could also just jam the record.
Track this 7inch down! While unlike Dissent’s previous release, this has been given a decent pressing by a good label who has distributed it well to many good distros. Order it from Torture Garden or Dissent asap! Its not on any blogs, as no one has ripped it, so you will need to be a wax-head until someone decides people deserve to hear this without paying for it.

Okay Hellbastard gets sort of torn apart by the Dissent side, but I will try to be nice to one of my favorite old crusters. The band reunited out of nowhere in 2007, and has gone through a million members since, all rotating around guitarist/vocalist/original member, Scruff.
Hellbastard’s new material is not something to write home about. But thats okay, because this record only has one new song. Its not even a new, new song, its a different version of a song release on one of their new full-lengths. I’ve heard it before, so I listened to this new version once.
Its not as bad as I make it out to be, its listenable music, but sometimes I think Scruff is losing his mind. If you’ve ever met him, he’s a character. This is a part of Hellbastard, so I guess this song is okay. No, I just relistened to it, its nothing like old Hellbastard, and instead sounds like they’re trying to sound like a radio-metal band. Skip at will.
What saves this side is the rerecorded version of the old song from 1985 called Massacre. Its a great old song from when the band was good. And well, its a good song. I’ve listened to it a few times, always skipping the first song, because I cannot stand to hear new Hellbastard. The fact that I just gave it another shot mid-review and changed my mind has reminded me of that. Yet old Hellbastard still rules, and luckily they still mostly play old stuff live, so good for them! I don’t have anything else to say about this release, I keep it on the Dissent side and don’t really flip it over. I’m not cut out for new Hellbastard.
So I unfortunately cannot rate this side as high as Dissent’s side, as the Hellbastard technically didn’t do shit for this release, they just threw 2 previously released songs in there and called ‘er a day, after knowing about this split for years. I am sort of proud of Dissent for showing them up. So buy the EP for them."
[nota: el punto de vista de voice of disgust en este resumen no es, necesariamente, el mismo del grupo crust-or-die]
DL Dissent!!!
DL Hellbastard!!!
Publicado por cm@punx en 11:55